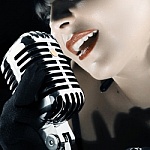 This past weekend my sister and I were at a local bar for their Saturday night karaoke get together.  Later that morning, when we arrived home I began researching the effects of singing and it’s relation to wellness.

This past week was Sing For Your Heart from December 8 th to the 15th in the UK.  Singing does not merely benefit our hearts but so much more as you will see in this piece.

While researching this topic I was able to locate some research studies that confirmed a few of my ideas on singing and improved health.  As a singer, I have noticed a sense of well being while I am singing and certainly stronger abdominal and back muscles but what I found out was even greater than I imagined.  I have used music to assist me in studying for exams on numerous occasions by creating lyrics with my course materials.  There is something to be said for using the part of the brain that remembers twenty year- old song lyrics.

You don’t have to be a great singer or even a rockstar to achieve the results that are contained in this blog.  What makes singing so appealing is that we can all do it and we can all benefit from doing so.

Sound therapist Jovita Wallace says “Sound vibrations massage your aura, going straight to what’s out of balance and fixing it.”
Singing the short-a sound, as in ahh, for 2-3 minutes will help banish the blues. It forces oxygen into the blood, which signals the brain to release mood-lifting endorphins.
To boost alertness, make the long-e sound, as in emit. It stimulates the pineal gland, which controls the body’s biological clock.
Singing the short-e sound, as in echo stimulates the thyroid gland, which secretes hormones that control the speed which digestion and other bodily processes occur.
Making the long-o sound as in ocean stimulates the pancreas, which regulates blood sugar.
To strengthen immunity, sing the double-o sound, as in tool. This activates the spleen, which regulates the production of infection fighting white blood cells. (1)

Scientists say singing boosts immune system.
– Singing strengthens the immune system, according to research by scientists at the University of Frankfurt in Germany, published in the latest edition of the US Journal of Behavioral Medicine. The scientists tested the blood of people who sang in a professional choir in the city, before and after a 60 minute rehearsal of Mozart’s Requiem.They found that concentrations of immunoglobin A – proteins in the immune system which function as antibodies – and hydrocortisone, an anti-stress hormone, increased significantly during the rehearsal. A week later, when they asked members of the choir to listen to a recording of the Requiem without singing, they found the composition of their blood did not change significantly. The researchers, who included Hans Guenther Bastian from the Institute of Musical Education at Frankfurt University, concluded singing not only strengthened the immune system but also notably improved the performer’s mood. (1)

5 Reasons Singing Is Good for Your Health

The YOU Docs love good music (one of us, Mehmet, cranks up Springsteen in the operating room; the other, Mike, is a huge fan of both classical piano and Frankie Valli). But when it comes to singing, we don’t care whether you’re first soprano in the church choir or you just belt out off-key oldies in the shower with the door locked. Bursting into song lifts your health in ways that surprise even us (and might make the cast of Glee America’s healthiest people). The benefits should get you singing out even if you can’t carry a tune in a bucket.

1. Lowers your blood pressure. You may have heard the heartwarming news story about a woman in Boston whose blood pressure shot up just before knee-replacement surgery. When drugs alone weren’t enough, she began singing her favorite hymns, softly at first, then with more passion. Her blood pressure dropped enough for the procedure, which went off without a hitch. Now, we’re not suggesting you trade blood pressure treatments for a few verses of “Amazing Grace.” But try adding singing to your routine. It releases pent-up emotions, boosts relaxation, and reminds you of happy times, all of which help when stress and blood pressure spike.

2. Boosts your “cuddle” hormone. Yep, oxytocin, the same hormone that bonds moms and new babies and that makes you and your partner feel extra close after a romp in the hay, also surges after you croon a tune with your peeps

3. Allows you to breathe easier. If you or someone you know is coping with chronic obstructive pulmonary disease (COPD), singing just twice a week could make breathing feel easier and life feel better. In fact, in England there are “singing for breathing” workshops. The benefits, said one person with the lung disease, “It makes me feel on top of the world . . . and it makes COPD a lot easier to live with.” Why wait for a workshop? Try crooning a tune or two on your own.

4. Helps you find serenity after cancer. Surviving cancer is a major milestone, but afterward, you still have to cope with the memories (tests, diagnosis, treatments) and quiet will-it-come-back worries. Vocalizing can help you blow off steam and stress. Turns out that singing actually calms the sympathetic nervous system (which tenses up when you do) and boosts activity in the parasympathetic nervous system (which makes you relax).

5. Rewires the brain after a stroke. Plenty of people who’ve survived a stroke but lost the ability to speak learn to communicate again by singing their thoughts. Singing activates areas on the right side of the brain, helping stroke survivors  to take over the job of speaking when areas on the left side no longer function. Called melodic intonation therapy (MIT), it’s used in some stroke rehab programs, and insurance may cover it. Ask about it if someone you love has speech difficulties from a stroke.

That’s not all singing can do. It also helps everyday health, increasing immunity, reducing stress for new moms, quieting snoring, easing anxiety in ways that may also ease irritable bowel syndrome, and simply making you feel happier. That’s a great return on something you can do in a choir, in your car, with your kids, in the shower, or even (you knew we were heading here) in a glee club. Here’s how to put the “glee factor” to work for you.  (2)

Helen Astrid leading vocal coach and singer, confirms that regular exercising of the vocal cords can even prolong life, according to research done by The Helen Astrid Singing Academy in London. “It’s a great way to  keep in shape because you are exercising your lungs and heart. Not only  that, your body produces ‘feel good’ hormones called endorphins, which  rush around your body when you sing. It’s exactly the same when you eat a  bar of chocolate. The good news with singing is that you don’t gain any  calories! Not only can it increase lung capacity, it improves posture,  clears respiratory tubes and sinuses, and can increase mental alertness  through greater oxygenation. It even tones the muscles of your stomach  and back, that is if you’re singing correctly.”

After consulting some therapists and my psychology textbooks from university I also was able to confirm the following:

Singing can help boost confidence, cure depression, process negative feelings and improve relationships.  There is something to be said for the feeling one gets when people clap for you after you sing as well,

Singing even helps you live longer according to the findings of a joint Harvard and Yale study which showed that choral singing increased the life expectancy of the population of New Haven, Connecticut. The report concluded that this was because singing promoted both a healthy heart and an enhanced mental state. Another study at the University of California has reported higher levels of immune system proteins in the saliva of choristers after performing a complex Beethoven masterwork. (3)

According to The perceived benefits of singing findings from preliminary surveys of a university college choral society :

The Arts – Music and Singing – Music as a therapeutic medium has demonstrated to be efficacious for pain management (Trauger-Querry & Haghighi, 1999), in facilitating the resolution of grief (Bright, 1999), as a means of finding a personal identity (Smeijsters & van den Hurk, 1999), to improve the lives of people with communications problems related to cognitive impairment (O’Callaghan, 1999), and to enhance the quality of life for Alzheimers patients (Hanser, 1999). Recent longitudinal analysis of music-therapy related articles in the ‘Etude’ music magazine for the period 1883 to 1957 has also indicated consistent and adamant support for the (physical and psychological) health benefits of singing (Hunter, 1999) (1)

4. The perceived benefits of singing findings from preliminary surveys of a university college choral society 2012.

Beautiful photos of hiking and other outdoor adventures.

I am just a girl from Kentucky who has stories to tell. . .

Soothe your Body, Nourish Your Mind, Feed Your Soul, Free Your Spirit

A journey through the promise of God for healing!

a journey with chronic pain

My Lord, My Friend

For Such A Time As This!